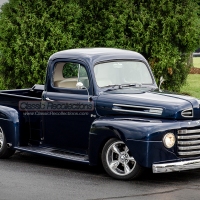 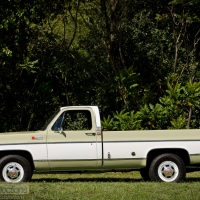 While walking around Friday’s Culver’s cruise night in Palatine, we spied this cherry 1968 Pontiac Firebird. With its clean lines and non-nonsense factory treatment, it more than garnered an extra look from us.

We snagged its owner, Ken Pitcher, who had just driven over from nearby Inverness, and chatted to find out a few details about his GM muscle machine.

Ken Pitcher behind the wheel of his 1968 Pontiac Firebird.

“I’ve always been into cars – my first one was a red 1971 Plymouth Satellite with a 318. Being in high school in 1979, more of my friends had muscle cars than boring economy cars.  They had stuff like AMC Javelins, Z-28 Camaros, Chargers, ‘Cudas, Chevelles and Mustangs.  It was perfect timing, as they were cheap and plentiful, but also rusty and breaking down.  As a high school kid, you don’t have alot money, so you learned how to work on cars out of necessity – fueled by reading Hot Rod and Car Craft magazines in the school library, learning how to get more performance out of them.” 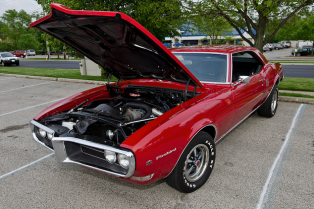 “When I started looking for a classic car, my primary goal was to find something fun to drive.  I looked at newer Corvettes but muscle cars were always in my blood and with 2 small kids, it’s nice to have the back seat so the whole family can go to a car show or just go out cruising.” 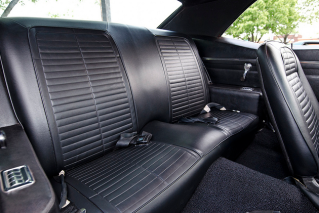 “I found this one on E-Bay last summer – for sale locally at a small specialty dealership. Details were sparse but I was able to get a lot of information from the Pontiac Historical Society (PHS).  This is a completely correct, numbers matching vehicle.  PHS documentation was able to verify the Solar Red exterior with standard black interior, the engine, transmission and rear end numbers to all be correct.  Then this year, when I was having the seats re-covered, I found the build sheet under the rear seat – verifying the PHS documentation.”

“Underhood is the stock 350 2-barrel engine putting out 265 HP. The car also has the 2-speed Powerglide automatic transmission, with column mounted shifter. The 10 bolt rear-end is out back and the stock Rally II Pontiac 14” wheels have been professionally painted and clear coated by my local body shop.”

“I also put in a small powered sub woofer in the trunk for added punch, but one that still keeps a low profile to allow room for chairs or golf clubs in the trunk.”

“The car is such a blast to drive, 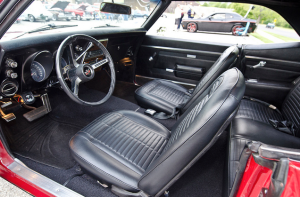 and I get thumbs up and appreciative smiles from everyone we see.  Driving in the Firebird is like being in a time capsule. It takes me back to a simpler time – when a gallon of gas was under a dollar, you could actually fix something on your car yourself and they were just plain fun to drive and hang out in.”

“My two boys always love going for a drive with ‘daddy’ – whether out for ice cream or just cruising around the neighborhood.  They love putting their hands out the window and listening to fun music as we go down the road.”

Cruising season has just begun in the Midwest and we’re looking forward to a warm summer of finding more great rolling relics – just like Ken’s ’68 Firebird.

**To find out what classic car events & cruise nights are taking place near you, swing over to our Cruise Calender**

A feature in the: